The final touches are going on to Father Robot issue #2, and I’m already working on the pages for issue #3.  My minutes of free-time are few and far between these days, but I wanted to take some time to put another sneak-peek up.

FR sure loves his Clarabelle.  I hope all of you get a big hug from a well-meaning robot soon too…

Colors by the outstanding Jenny Gosk.

The pages for issue #2  came back from the colorist, the wonderful and talented Jenny Gosk, and I’m so excited!

I’ve been working non-stop to put the finishing touches on everything, and now I can barely string two sentence together.

So, here’s a sneak peak from the new work.  ENjoy, and more soon!

Just working on some more concepts of vehicles for the ol’ comic book series.  In addition to the mobile lab, the story calls for a whole mess of vehicles in a para-militaristic convoy of sorts.  So, I thought some jeep-like ATVs might go well with that big truck.  What I was going for was a simple concept that would serve to have components that could be switched out/added on to and such.  Here’s there’s a roll-bar, but there just as easily have an anti-bullet bubble, like the one the pope can create, an armored metal-plate hardtop, or maybe a wench on the front.  Mounted-machine guns, anyone? 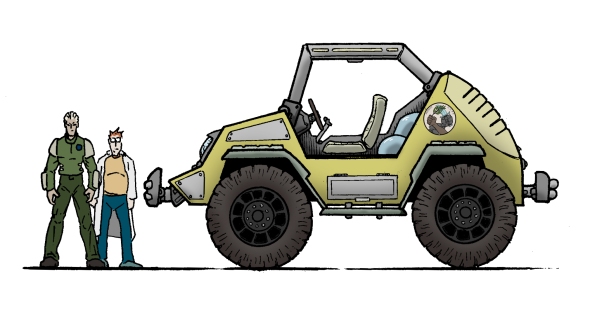 There’s a few characters sketched-in for scale.  I did the line work by hand, but the colors were added in Photoshop.

Next, I need to come up some mobile barracks for when the convoy stops at the local equivalent of a KOA.  I should probably finish working on the comic book pages first.

We got a little ol’ convoy…

You might remember a concept sketch for this sci-fi truck going up a number of weeks back.  Well, here is a preview from its first appearance in Father Robot issue #2.

The vehicle is to be a mobile lab, meant to bottle-up ol’ FR and find out what makes him tick.  If you look real carefully, you might be able to get a peak at the big baddie whose time-to-shine is coming up soon.

I got a button-maker for xmas, and I couldn’t be happier.  There’s something immensely satisfying about crushing a stack of plastic, metal, and paper with a heavy press and then out pops a shiny button.

Instead of making awesome comic pages over the holidays, I’ve been easily distracted by covering my drawing table with numerous, glossy buttons.  It’s an addiction…

Also, these should go great at future convention tables.