I’m trying to wind myself up for a new project.  It involves lots of spacesuits, robots, and ruined, industrial sci-fi settings.  Really, everything I love in life… imaginary life.

One of the most-difficult ongoing struggles I face is finding enough time to draw.  The last year has been so busy, I’m thinking about not taking on more freelance commissions for the near future, at least until I’ve finished drawing a few things that have been waiting for a while now and are pounding at the door on my conscience.

Enough of that, you came here for the drawing, right?  So, here’s a little sketch I cleaned up to get the juices flowing.  It’s going to be on the table for that upcoming project.  More on that soon…

What are you, some kind of half-assed astronaut?

Living in San Francisco meant I was one of thousands of artists roaming the city, often subtly (or not at all) drawing their fellow citizens, especially on the BART.  It’s a little bit harder to sneak in a drawing of someone sitting nearby in Oklahoma City.  People tend to notice and get weirded out much faster here.  I guess artists aren’t quite as accepted here as they are on the West Coast…

Anyway, this guy was actually dressed quite nicely for work when I made him a quick-study subject at lunch this week.  I added the spacesuit because… well, because spacesuits are more-interesting than collared shirts.

It was a New Years goal of mine to draw more and post often.  Life has a funny way of getting in the way of even the most honest intentions, though.  Things change, circumstances are not always what they appeared to be at first, and new opportunities come about.  So… let’s try it again.  Here I am, promising myself more work forthcoming.

Here’s a cute little spacesuit to keep one from dying horribly in strange places.

No matter how many times I study reference books, go to a live model study, or just look at my favorite artists’ work, I always end up slipping back into my old patterns of drawing folds.  Those standard clothing fold that happen with all tight, hipster garb, regular fitted clothing, loose, oversize idiot-wear, or even the occasional spacesuit have some definite rules to follow.  I can’t help but ignore some of them.  So, I try to constantly retain myself with what clothing does on certain limbs, joints, body types, tension points, and all that jazz.  It’s a losing battle.  If I don’t keep up on it, i always revert back to bad habits.

Anyway, here was a warm-up space suit I did this morning, trying to get my folds focused.

I used a Copic drawing pen.  I love the feel of the thing, but the one I bought has the most inconsistent ink flow of any tool I own.  Sigh…

Stars in their eyes.

Have you heard that when you live in zero gravity for extended periods of time, you’re eyeballs start to squish?  That’s amazing!  I’m a pretty big fan of all-things-spacey, but this is news to me.  Not good news, I guess, but still interesting…

So, I assume that any career spacers would need robot eyes pretty soon.  I sketched this guy out this morning, inspired by the need for my space-suited characters to have mechanical lenses instead of stupid, squishable, meat balls for seeing all the awesome stuff out there in the cosmos.  Also, it seemed right to give him a little cone head too.

Posted in Practice Pieces, Robots For All, Sketchbook, Spacesuits Required

Lurking in the shadows.

When I do a turnaround for a new design, I always include a silhouette.  This helps me to make sure I have the shape and style right, that i’m not going to start using a concept that isn’t going to end up fitting correctly for what i need it to.  Also, silhouettes are great shortcuts for storytelling, especially when you’re just totally burnt out on drawing the same character over and over again.  My designs tend to be heavy on detail (because I LOVE details!), so it’s nice to know that the overall shape is clear too.

This is the silhouette from the lady’s space suit in the Garman Hagland project.

You may recognize the pose from other work I’ve recently put up.  That’s because I reworked the pencils, laid down some vellum, and re-inked the drawing to try a little variation of the regular suit.  I really like the “puffy”, padded kind of space suit fabric, and while I didn’t commit to covering every section with that here, I still think it’s an improvement.

I only had one-sized pen with me today, so I didn’t get a lot of line thickness variation.  However, some a little practice piece, I’m pretty happy with it.

If this suit looks familiar, it’s because it was an early design for the suit Cody Hagman and I are using to do out Garman Hagland project, which, in case you were wondering, has many more awesome images to come soon.

I’ve been in a bit of a dry spell lately due to melodramatic changes in my life.  However, things are beginning to stabilize, thanks to friends like Cody, and I’m promising more unbelievably soon.

Until then, enjoy more sketches, unused designs, and just random stuff like this.

I wanted to make a suit that was decidedly feminine in shape, but still somewhat realistic.  To that end , I originally put more padding on this concept.  Ultimately, I trimmed it down more (too much?) in order to show off her curves more, but I still think this one has its charms.

This was done with more technical pens from my favorite brand, Copic.

Inking, like any skill, requires practice to keep up.  Sadly, I haven’t handled  a brush and ink pot for too long.  I’ve been traveling a lot (too much?) in the past year, and it has required me to carry a more mobile set of tools to do drawing with.  So, I’m trying to make a more concerted effort to get back to adding some massive blacks to my line work.  I still don’t have an ink pot handy (they tend to make a mess when they break in your bag), but I can still apply what know with pens. This is just practice, and I thought I’d share:

Yes, it’s a spacesuit.  What did you expect from me?

The as-yet unnamed heroine of the Garman Hagland project is getting closer to that far-off city.  It looks like there’s been some trouble in the past, though. 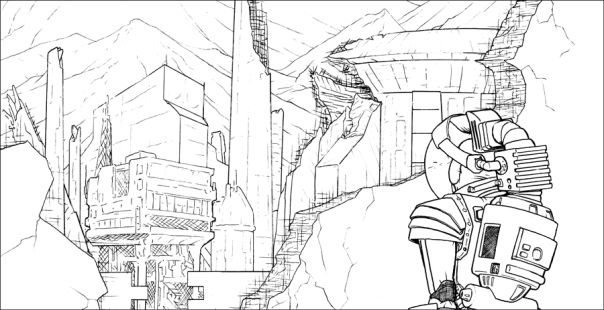 Posted in Comics, Practice Pieces, Robots For All, Spacesuits Required